Whilst selecting my Fantasy Football team a couple of weeks ago I had somewhat of a light bulb moment. What if I could use the format and create a lesson around it? This idea came to me at the same time as I was revising key individuals throughout medicine with my Year 11 GCSE history groups. A perfect match (sorry)! . So, here's how my Fantasy Football Medicine lesson played (really sorry) out..........

Whilst the pupils entered the room they were given a post-it note and told to write the name of an individual and why they are important in the history of medicine. I also had this video (which I created using Animoto) playing on a loop to provide extra stimulus and act as a bit of a reminder for those pupils struggling to think of an individual. This worked really well and succeeded in getting them on board and engaged in the learning. 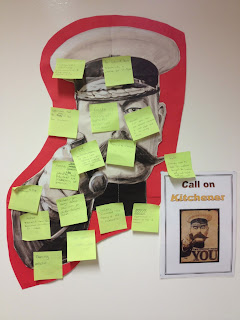 The Medicine Through Time development study requires pupils to remember around 20 key individuals and their contribution to medicine. Pupils sometimes struggle to (a) correctly remember individuals and (b) place them in the correct period of medicine. So, any activity which can reinforce their knowledge and understanding of key individuals is very much welcomed.

The team sheet required pupils to select the 11 individuals who they think had the greatest impact on the history of medicine. Pupils worked in pairs and used colourful flashcards to support them. Now, this is where the lesson took an unexpected turn. I thought pupils would simply write down down the 11 individuals they thought were most important, however, it generated some interesting discussion such as 'let's put Galen in goal as no one could get past him for a 1000 years' and 'you can't have Koch and Pasteur upfront as they'd never pass to each other'. There was also some concerns that Vesalius wouldn't make a great central defender due to his height, however, he was likened to a Messi with a low centre of gravity and all.

Pupils then had to justify why they had chosen that particular individual by filling in the who, what, where, when and why grid on the reverse of their team sheet. 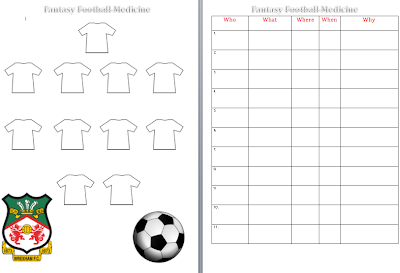 Once team sheets had been completed pupils were put into groups of four and each pair had to argue why their team was better than the other team. Again, this produced some interesting debate.

Man of the Match

Once pupils had finished their peer assessment I asked them to write down who their Man of the Match was (most important individual in medicine) and why.

I used the Room 101 plenary as I really wanted pupils to think about the individuals they had not selected for their team. I did have to explain the concept of Room 101 to a few pupils but  that didn't take too long. I then got them to nominate an individual they would get rid of and why. Again, this produced some great debate as pupils argued their reasons for placing an individual in Room 101.

Overall, I was really happy with how this lesson worked out. The pupils were engaged and having meaningful conversations about the individuals and their contributions to medicine. My only concern is that a few pupils became a little too fixated on where the different individuals should be playing!

You can download a copy of the lesson and all the resources here. Could you adapt this for your subject?